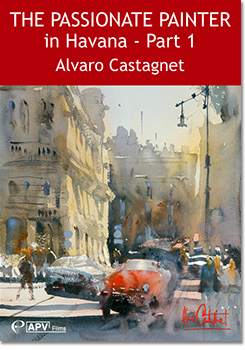 The Passionate Painter in Havana - Part 1


Alvaros passion for watercolour is matched here by the vibrancy and colours of Havana. We follow Alvaro as he discovers and paints the broad boulevards, narrow cobbled streets, flaking Spanish colonial buildings and the 1950s American cars which are such a feature of Havana..

In Part 2 of his adventures in Havana, Alvaro concentrates on painting the flamboyant characters that abound in this great city. Click here for more info 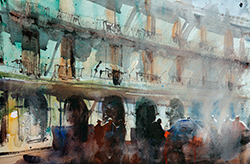 A lot of demonstrators adopt a persona and Alvaro Castagnet is The Passionate Painter. Its an apt soubriquet as he is an enthusiastic and emotive practitioner and presenter. The bustling streets of Cubas capital are ideally suited to his working method and he captures their vibrancy with great eloquence: Everywhere theres a painting to be done .. theres a painting in every corner.

Alvaros painting style is quite quick and is built up in layers using broad brushstrokes, which gives depth in both tone and perspective. His commentary is less technical than some (How about that for a brushstroke!), but its easy to see what hes doing and there is little fine detail that needs careful attention from the viewer  at one point, the very thin brush he introduces is about a size 8! It has to be said, I think, that the style of the commentary is something you could grow tired of. On the other hand, youll almost certainly forgive Alvaros flamboyance because of the virtuosity of his painting and his amazing handling of light, both full sun and shade, which the streets of Havana provide plentifully.

There are five demonstrations and Alvaro shows you how to create an image out of elements that have come from elsewhere rather than simply copying what you see in front of you. As he says, I always have a vision of what I want to say in the finished painting.

Alvaro is confident, both as a person and a painter and, as a result, hes eminently quotable. Here are two more: Once Ive got the shape [of a drawing], I know how to fill it in with washes and Once you set up the family of hues, you stick to them for homogeneity. Those are pearls of wisdom I havent heard expressed so succinctly anywhere else and theyre worth the price of the film on their own. So, now Ive told you about them you can save your money, yes? Oh no, because you havent seen Alvaro at work, or heard the rest of what he has to say. Believe me, hes charismatic and inspiring and a great exponent and demonstrator of the art of creating an image. I suspect that, in real life, he wouldnt be my type at all, but I was captivated in these 95 minutes.

Most demonstrators adopt a persona, but Alvaros is an accurate characterisation and the bustle of the sunlit streets of Cubas capital suit both his personal and painting style.

Beginning with a drawing Alvaro works in a series of layers built up with rich washes that blend subtly and provide depth of both tone and perspective. In the final stages, he adds highlights that create a centre of attention, frequently with bright colours. Alvaro is not as technical a demonstrator as some, but all the information is there, sometimes thrown away, so pay careful attention throughout. Overall, this is thoroughly enjoyable and informative.

Alvaro Castagnet has been a passionate painter in Antwerp, Paris and the North of England and now its Havanas turn  and what better place to show the painters vibrant watercolours than the heat and colour of Cubas capital city. Alvaro has a quick watercolour painting style born of many years experience that makes what he does look simple. He builds up paintings in layers, using broad brushworks and large brushes, creating expressive paintings full of atmosphere and dramatic use of light and shade. Part one of the two-part set includes five demonstrations that concentrate on the streets and architecture of the city  from the broad boulevards furnished with 1950s American cars to the narrow cobbled streets. Alvaros commentary is lively an charismatic, unhindered by technical jargon.

Part two concentrates on the flamboyant characters in the city  musicians and bicycle taxi riders, café scenes, a barbershop and one of Havanas famous cigar smoking women. Its fascinating to watch him at work and both his paintings and this timewarp city are sure to captivate you.

(10/10)  Submitted by: orlando miranda 19-Apr-2017
Alvaro is fun to watch and learn! The DVD is very instructive, many valuable lessons and great tips about colour tones and composition.