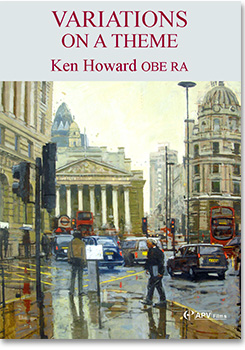 Variations on a Theme


Ken Howard's painting is essentially about light. He believes that as a subject changes so much throughout the day, it is not possible to work on the same painting for much longer than an hour. In this film he paints in oils in London. He paints a series of boards as the light changes, firstly of Tower Bridge and then the Royal Exchange in the City. Selecting the paintings of the Royal Exchange, he then shows us his approach to preparing, squaring up and painting a large canvas, working from these smaller boards. 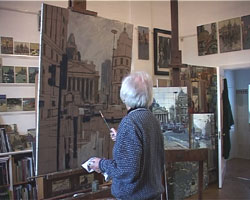 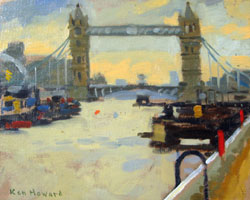 What could be better that to join Ken Howard as he tackles the fickle London light to paint views of iconic buildings? For Ken Howard painting is essentially about light. He is a tonal painter  amongst contemporary artists arguably the pre-eminent tonal painter  and therefore invariably his judgement of a subject, whatever the colour, is in terms of tonal relationships. Whether in London or Venice or in London, in watercolour or in oils, it is always fascinating to watch him at work and to hear what he has to say.

In Variations on a Theme, Ken initially paints outside, choosing views of Tower Bridge and then the Royal Exchange in the City, and working in oils on fairly small, prepared boards. His aim is to capture the mood and sense of a place at that particular moment, and so, because the light changes so much throughout the day, he usually works on a painting for only an hour or so. Working in the studio, with reference to the paintings made on site at the Royal Exchange, Ken shows how he prepares, squares up and paints a 40 x 48in (101.5 x 122cm) canvas. The studio painting is much more resolved than those made on site, of course, but with no less mood and vigour.LEISURE PAINTER - February 2008

Ken Howards work always reveals his fascination with light, and in his latest film, Variations on a Theme, he chooses to show exactly how much changes in light can alter the atmosphere of a painting. Monet established his career by painting series of images of the same subject, transformed under the variations of the colour of light as the day passed. In this film, Howard works in a similar manner, showing why he believes it is not right to work on the same painting for more than about an hour and a quarter, because the atmosphere, shadows, highlights and colour temperature will change too much.

To demonstrate his point, Howard works on two oil series, showing contrasting London landmarks. The first is a view of Tower Bridge, looking across the river, for which he completes three studies on small boards, noting the changes in light from just before lunch, to later in the afternoon, and then as the light begins to dim. The second sees him on the streets of the City, mapping out a view of the Royal Exchange. Again, he works on boards, first a smallish sketch, followed by a much larger one, but of the same proportions. Off camera, he later returned to the location to finish the larger sketch. Whilst the general lighting conditions were the same, a fall of rain greatly altered the appearance of the scene, so back in the studio he painted a small sketch from memory.

Continuing the film, Howard takes the composition of the larger study and the wet, reflective qualities of the smaller sketch to form the basis of a larger, more formal painting. Working in his fantastic studio, he shows how he squares up his original study and canvas, and sketches in the general shapes. He discusses how he uses the tonal relationships within the image to build his painting, and also how to make the reflections accurate. After subsequent visits to the location, and living with the painting for a number of days, he finally shows how he alters the composition for a more satisfying result.

This is a fascinating and enjoyable film that provides insight into how Howard considers and develops his paintings, and in doing so, offers viewers a wealth of advice on how to improve their own work.