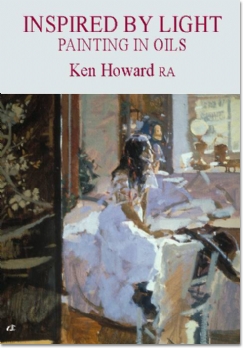 Inspired by Light: Painting in Oils


Ken's work has a very special quality and with his strong sense of tone and use of light we see him paint some of his favourite subjects. Working with models, he paints figures in his studio in Cornwall, using the light shining in through the window to stunning effect. Working outdoors, he paints a view of Mousehole Harbour with boats at anchor and Sennen Beach in the evening light, with the sun shining through the windbreaks. 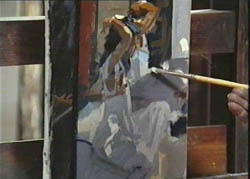 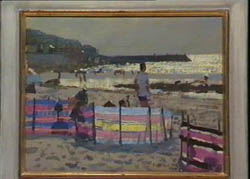 For Ken Howard, light has been an abiding passion, and more often than not it is as much the subject of a painting as the material content. It is therefore apt that his first video should be titled Inspired by Light (Painting in Oils).

Working in his vast and beautiful summer studio in Mousehole, Cornwall, he begins with figure studies, using two different models. Each model is posed near reflective surfaces, bathed in early morning light from the large studio windows. They continue a theme of studio paintings featuring models wearing diaphanous fabrics which began with his kimono paintings in the late 1980s. His energy and commitment are impressive. During his three summer months in Cornwall he maintains the discipline of booking a model for seven o'clock each morning, Monday to Saturday. He explains the challenges of this approach, and his exuberant response to the 'magic' of light as it enlivens and sculpts the elements, reinforces his absorption in the subject.

Howard's part spontaneous/part -voiced-over commentary is extremely professional and well paced, describing the reasoning behind his methods with great clarity. He considers good draughtsmanship vital, and shows how his initial charcoal drawings are questioned and restated in colour right up to the completion of a canvas. He describes himself as a tonalist rather than a colourist and demonstrates how he builds a painting from dark to light, always aiming to achieve a visual unity. His darks are never opaque; something he knows will deaden the painting. If necessary he adds coloured glazes to lift them.

In the second half of the video, Howard moves outside, first to paint Mousehole Harbour. Here he constantly reworks the colour and tone to achieve harmony. He advises that we should never allow ourselves to let errors pass with the attitude that 'it will do'. Ironically (and comfortingly!), he inadvertently seems to commit this very crime, although I think most of us would be delighted if our 'errors' turned out so well!

The final painting, a small canvas of Sennen Beach painted in the early evening, contre-jour, includes what was the original inspiration for the studio paintings with which the film began. The windbreaks, or lightbreaks as he rechristened them, hold the light in the same way the translucent garments did, silhouetting figures and providing interesting spatial divisions.

Ken Howard RA is one of this country's most admired and respected living artists. This fascinating video conveys Howard's appetite for life and art, and his inspiration is contagious. I found it gripping.THE ARTIST  December 1996

For those wanting some rather more practical advice and instruction in oil painting I can recommend Inspired by Light by Ken Howard RA. The Ken Howard film is shot almost exclusively in Cornwall where, every summer, he spends three months at his studio in Mousehole. He is the master of light and tone and this is an absorbing film to view - so much so that I watched it twice! His early starts puts most of us to shame, for he is generally at his easel by 7am. This is to make use of the early morning light as it streams in through high windows and bathes model and interior in a fascinating play of lights and darks. We also see him working on a large canvas and painting two outside scenes, one of Mousehole harbour and the other of Sennen Beach in the evening light, painted contre jour. Painting, he says, "is a constant business of building everything together," and throughout the video his commentary is revealing and instructive.