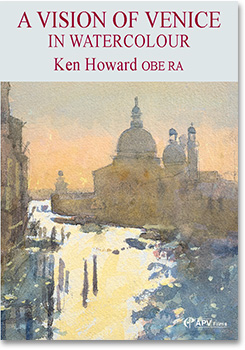 A Vision of Venice in Watercolour


Venice, with its architecture, earth colours, figures and atmospheric light has had a great effect on Ken's work for over 30 years. Painting 'contre jour' with the intense light reflecting off water, roof tops or piazza, Ken builds up his watercolours with wash upon wash of transparent colour. Often working on two paintings of the same scene, his subjects include St Marks Square, the Salute, Campo S. Angelo and the fish market. 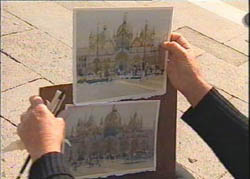 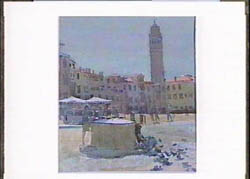 A vision of Venice

Like Turner and Monet before him, Ken Howard is preoccupied with painting light. As were his illustrious predecessors, he was lured by the extraordinary atmospheric character of Venice and his exploits and discoveries are recorded in a fascinating and instructive new video called A Vision of Venice in Watercolour.

Selecting famous sites - St. Mark's Square and Santa Maria della Salute - as well as some less familiar locations - the Campo San Angelo and the fish market - Howard renders them in his characteristic watercolour style. Most satisfying is that the video never over-consciously sets out to be a teaching aid yet it teaches remarkably well, almost by a process of osmosis. As his brush builds an image, his comments complement the work, apparently matter-of-fact but ultimately revealing and rewarding for the viewer.

Any painter looking for motive, inspiration and that 'something' which will improve their work, will find these in Howard's simple and effective philosophy. He wisely advises the artist to celebrate the subject and make the viewer feel elevated by it. Easy enough to say but Howard conclusively demonstrates that in order to convey such sensations the artist must feel them first. Being neutral or impassive about one's subject will probably result in a painting which neither celebrates nor elevates. This is just as important a lesson as learning how to build up a series of transparent colour washes, knowing which weight of paper is most suitable, understanding how to create an harmonious surface of colour, how to get the most out of earth colours, how not to over-work the picture, or whether to apply a cobalt or alizarin crimson glaze to obtain a certain effect. The video reveals all this and more, but it is Howard's regard for his subject and his desire to communicate the very sensations he felt whilst standing before it which shine through and ultimately make his work exceptional.THE ARTIST  May 1999

A Vision of Venice in Watercolour.

Full of architectural splendours, bustling activity and wonderful contrasts of colour, texture and light, Venice offers an infinite variety of subjects for the painter. In this splendid film Ken Howard paints at four different locations in the city and shows us something of what Venice means to him. He begins with two small watercolours of the facade of St Marks viewed across a busy St Mark's Square, and the other paintings include an early morning, atmospheric Salute painted from the Accademia Bridge, Campo S Angelo, and the fish market, which is painted in watercolour and mixed media.

"I never work large with watercolour," says Ken. "They are usually about light and therefore you've got to get them done quickly." Having drawn in the salient features, he then builds up the subject by applying a series of washes of transparent colour, wet over dry. He often tapes a small sheet to each side of his board so that he can work on two paintings at the same time. It is a joy to watch him at work and an added bonus is his commentary, which is just as enlightening and absorbing.