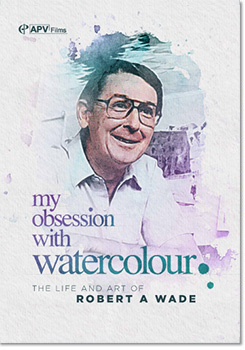 My Obsession with Watercolour


It started with a brushstroke and lasted a lifetime

This film traces the fascinating life of Australian artist Robert A Wade and his journey to become one of the finest watercolour artists of our time. Told in Bobs own words and featuring interviews with art luminaries such as Alvaro Castagnet, Tony Couch, Amanda Hyatt, Herman Pekel, David Taylor and Joseph Zbukvic, this extraordinary documentary offers a rare glimpse into the world of this highly awarded artist and his lifelong obsession. An array of Bobs masterful paintings is included plus several of his classic demonstrations. This film is a special treat for anyone who appreciates art. 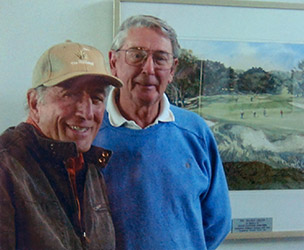 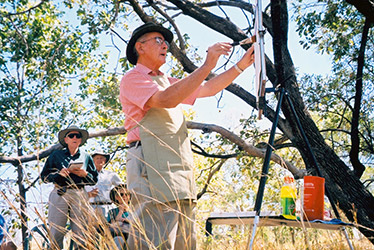 In celebration of his 90th birthday last summer, APV Films brings us a new film on the life and art of the great Australian artist, Robert Wade. Bob has always been passionate about painting, telling us that he can't remember a time when he wasn't holding a pen or pencil. The artist was just 18 when he was forced to take over the running of the family business designing posters and billboards for theatres when his father died suddenly.

His two great loves are watercolour and golf, and he has thrown himself into both with energy and passion, creating hundreds of watercolours that have received accolades from galleries and professional societies - as well as golf courses - all over the world. He is the first Australian to be elected to membership of the American Watercolor Society and he was instrumental in setting up and organising some of the very first overseas painting holidays.

ln this film, Bob tells us about his life and painting journey to become one of the finest living watercolour painters of our time, interspersed with interviews by many of his artist friends and colleagues, as well as several classic painting demonstrations. 'Watercolour is about seeing with your brain and interpreting it with your heart,' says Bob and the many beautiful watercolours shown here bear witness to that. Scintillating with light and life, each of them tells its own story by a master of the watercolour medium.

Making films in these improbable times is a challenge and understandably APV have not produced anything in their usual format. This tribute to Australian artist Bob Wade was originally planned to coincide with his 90th birthday, but the interviews were curtailed by strict lockdowns in Melbourne, where he lives.

Celebrations are often really only of interest to the subject themselves, and maybe those who take part and hope for a little reflected glory. This, however, is sensitively done and made with a broader audience in mind. At its core is an extended interview with Bob, who reminisces about a life devoted in one way or another to art. His greatest love is watercolour and his eyes sparkle like a luminescent painting as he talks about the surprise and wonderment and magic that suddenly appear before your eyes. Of what he calls visioneering, he adds, [Its] seeing with your brain, feeling with your eyes and understanding with your heart. Can you come up with a better definition of both the physical and mental process of creating a piece of art? Thought not.

Interspersing this are tributes from many of Bobs Australian contemporaries, who manage to say a great deal more than hes a wonderful artist. Underlying everything is sound, honest watercolour technique, says Herman Pekel. The aside, Bob is a storyteller, is perhaps the greatest truism in the whole film.

To make sure the film isnt just talking heads and still images, extracts from some of Bobs classic demonstrations are included. These do not, it should be said, add new unseen material, but they do add a gloss to the words and remind us of Bobs working methods.

As I implied, films like this can be dry as dust and self-congratulatory. This is neither and is gripping from start to finish. Much of that is down to Bobs character. His joy in his medium is always evident and its enthralling to hear him talking about it more generally than he would in a specific demonstration. The tributes are heartfelt and its clear that he is a man genuinely loved by his fellow artists, as well as students throughout the world.

Making a film in these unprecedented times is a challenge of the highest order. Nevertheless, APV have pulled off not merely the seemingly impossible, but an absolute triumph. This tribute to Bob Wade is a joyous celebration of both the man and his medium as he turns 90. A fulsome tribute lasting over an hour can be as exciting as watching the proverbial paint dry but, from the first notes of the restful opening music, this is a delight. Bob looks back at a lifetime of painting and shares not just memories but the sheer joy of painting in watercolour and 'the surprise and wonderment and magic that appear before your eyes. lm a people person, he adds, 'that's what artists do, they notice things. Tributes from fellow Australian artists add to the sense of a fulfilled life and the film is punctuated by extracts from several of Bob's demonstrations.