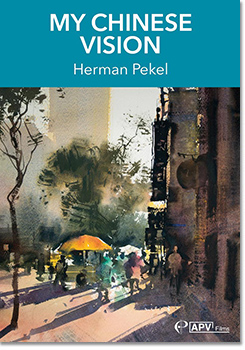 
Hermans love of the landscape is reflected in almost everything he paints and he produces paintings of strong design and powerful impact. In this new film, he visits China where he paints watercolours of some fascinating Chinese scenes. With unfamiliar subject matter and challenging conditions, Herman focuses on finding a focal point, manipulating the rest of the scene as necessary to create a series of stunning paintings. Subjects include a bustling street in downtown Qingdao, Chinese junks in a fishing village, pagodas in Jimo Old Town and a busy beach scene. 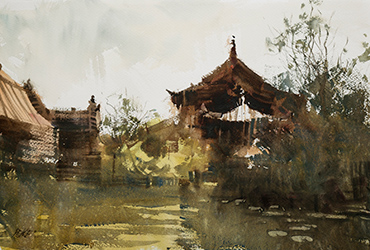 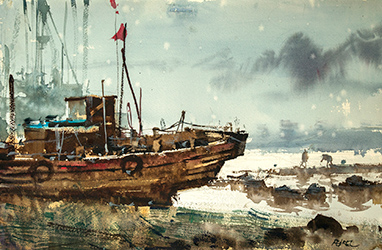 In my review of Hermans previous film with APV, I described him as a magician. To that, I think Ill add alchemist. Although this is filmed in China, the city street and beach scenes could be almost anywhere, although a session around (newly built) traditional architecture does give more sense of place. All the sessions are dogged by heat, humidity and a dense haze (which might be smog). Its clear that working in these conditions is hard labour and Herman does well to keep going and produce what can really only be described as pure gold from base metal.

What makes the film watchable, indeed compelling, is Herman himself. His commentary is continuous  few other artists can manage to work and talk at the same time as well as he does  and includes nuggets of wisdom youll want to write down. In the city, where buildings, street furniture and signs abound, he remarks, The more complex a subject is, the more I tend to use just drybrush. This combines with advice to Let the water, pigment and paper do the work for you to demonstrate ways of simplifying not just the subject, but your technique. He adds later, You must have a vision, you must see the painting finished before you start.

The scenes Herman chooses are unpromising and the haze makes things more difficult as details are obscured and distances barely visible. His ability to focus on a small area and to manipulate it into an effective composition is the alchemy I referred to earlier. He also has sound advice, especially in the conditions, to do 90% of the work on location, but to leave the remainder for later (on this occasion in the comfort of an air-conditioned hotel room) when you have had a chance to rethink. Here, outlines are tightened up and further details added that pull everything together.

Im not sure how much of a flavour of China this presents, apart from the heat and the crowds, and it would be unreasonable to suggest that it was something to look at from that point of view. However, as a lesson on painting in unpromising conditions, and on working on location with watercolour, its utterly gripping.

Herman Pekel is a joy to watch and listen to. He paints what look initially like unpromising subjects, but his running patter is studded with nuggets of wisdom and the results are pure gold from base metal. lf you're looking for any kind of introduction to China or Chinese painting you would, I think, be disappointed. A city street scene and its neighbouring beach could be almost anywhere (apart from the heat and the crowds), but a session around traditional architecture does give a more oriental flavour. What is mainly of interest is the aforementioned alchemy and the pearls of wisdom: 'Let the water, pigment and paper do the work for you'; 'There's no such thing as muddy colour, just bad technique'; 'You must see the painting finished before you start'. This is an enjoyable and worthwhile film on many levels, but perhaps not so much as a travel guide.LEISURE PAINTER - March 2018

Hermel Pekel studied fine art at the Royal Melbourne Institute of Technology and held his first one-man exhibition at the age of 17. His drive to constantly challenge himself is highlighted in his latest film, My Chinese Vision, in which he paints unfamiliar subject matter in often very difficult conditions - hot, humid and with people everywhere. Subjects include a street scene in downtown Qingdao, Chinese junks in a fishing village, pagodas in Jimo Old Town and a busy beach scene.