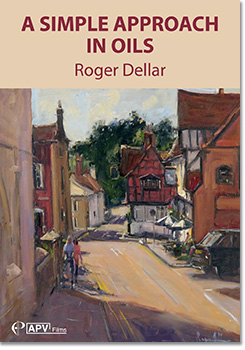 A Simple Approach In Oils


Roger Dellar loves to paint en plein air and is fascinated by the play of light on a scene, always looking for the big shapes to simplify his paintings. He likes to work with a limited palette and has a lightness of touch when painting. In this film we see him working in oils, choosing a wonderful selection of subjects in SE England. These include the HMS Warrior in Portsmouth Harbour, boats at low tide at Dell Quay and street and canal side scenes in Chichester town centre and the village of Midhurst. 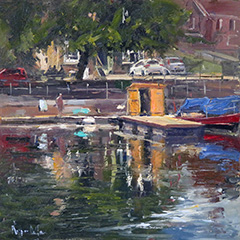 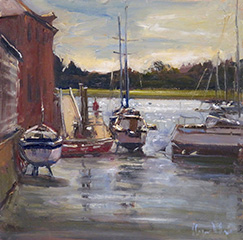 Simplicity is a complicated thing. It takes a lot of skill and experience to learn how to extract the essence of a scene without fiddling, over-working and getting bogged down in unnecessary detail. In the five paintings demonstrated here, Roger works from a basic blocking-out of shapes, a carefully selected palette that reflects the dominant colours and an economy of brushstrokes. His remark, Im lazy; I only use a few brushes is disingenuous  theres nothing lazy about it and, although hes not one of those painters who thinks hard before making every mark, each one is deliberately placed. Theres no random working, placing and re-placing. Its fascinating to see how he works from the general to the specific, with details at first scratched into shapes and blocks before being delineated with colour some time later.

Of the five scenes, three involve water  the other two are in the centres of Chichester and Midhurst. The common factor is that theres a lot going on  different craft on the water, details, people coming and going or a jumble of buildings. A literal approach, where everything is recorded, would be indigestible, but Rogers way of building up manages to leave nothing out while at the same time omitting all extraneous matter. Thats what I meant by the complication of simplicity: its not just about developing an eye for a picture, but about the means of putting it down on canvas.

Its also worth noting the palette exposition that starts the film. These are usually a matter of this is my palette, I put these colours on it. Rogers is much more, because he works with such a limited range and he explains here and throughout the film how these are chosen to reflect the scene in front of him. His idea of having two sections of white, one for warm and one for cool colours is a neat one, too. Palette explanations are rarely of more than passing interest, but this is riveting.

After I watched this film, I wasnt sure what I wanted to say about it. I left it overnight. It has to mature, I said, and it has. Roger doesnt instruct, he just explains what hes doing, so extracting the information is like brewing coffee  it cant be hurried. I find I have a surprisingly clear memory of almost the whole film and thats a measure of good explanation  simplicity always leads to comprehension.

As well as being a member of the ROI, the RI and The Pastel Society, Roger Dellar is also a member of the Wapping Group - a prestigious group of painters who meet each week along the banks of the Thames to paint on location.

Roger describes how he loves the challenge of painting something in a couple of hours, capturing the moment and the light that create energy in the subject. Here he shows us how to simplify the process, from choosing the right scene to working with a limited palette. Using oils, Roger demonstrates a range of subjects in south east England, including the HMS Warrior in Portsmouth, boats at Dell Quay, and street and canal-side scenes in Chichester and the village of Midhurst.

A DVD in which an artist walks you through a series of paintings is not a new idea. But this is one of the best we've seen in a long time. And that's partly due to the artist's personality.

Roger Dellar takes a cosy, casual approach to describing his plein air oil painting. He likes to finish his pieces quickly, he says, and keep them "as simple as possible. He only uses three colours, excepting Titanium White. He even calls himself "lazy" for only using a few brushes.

He's being slightly disingenuous there, though, because the sights he chooses to paint in the south of England are not at all simple, but full of visual clutter and movement. As a result, we get a masterclass in bringing out the essence of a scene without becoming bogged down in detail and accuracy.

In this 105-minute DVD, Dellar paints three watery vistas (HMS Warrior in Portsmouth Harbour; boats at low tide at Dell Quay; and a canal in Chichester) plus two street scenes (in Chichester town centre and the village of Midhurst). Each time, he begins with a basic blocking out of shapes, then scratching in details, before gradually building up warmth, light and colour until something magical emerges.

His amiable commentary continues throughout, explaining his evolving thought process, the techniques he's using, and what he's aiming for at each stage. Meanwhile the camera focuses in tightly on his strokes, occasionally panning back to the scene being depicted, or his mixing of paints, As a result, not a single moment feels wasted, either visually or aurally.

Dellar's incredible talent is more something you marvel at than attempt to copy, so this is not an instructional DVD as such. But his understated passion is so infectious that any oil painter will come away informed, inspired, and raring to go.

Simplicity is complicated. It takes skill and years of practice. Im lazy says Roger Dellar, I only use a few brushes, but thats only half the truth. The bulk of it is that the art is finding and sticking to the essence of a subject, omitting extraneous details, using an economy of brushstrokes and not over-working. The five scenes that Roger paints here are all in the south east of England and have potential for considerable complexity.

The warship at Portsmouth is surrounded by a welter of smaller craft and has a maze of rigging, but Roger works by building up shapes, using a strictly limited palette that picks out the dominant colours in the scene and only including detail where it matters. A canal-side demonstration in Chichester concentrates on reflections and is an exercise in the control of colour.

This is a masterclass in seeing and recording.

(10/10)  Submitted by: Lesley C 22-Feb-2017
Excellent. Demonstrates the importance of composition, simplification of shapes, beautiful colour mixes using a quantity of paint.
Lots of information regarding tips and techniques.
Suitable for beginners and more experienced painters.