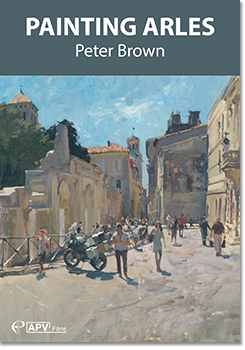 
In this film Peter Pete the Street Brown takes his oils to southern France. He is happiest painting en plein air, whatever the weather and in Arles he finds plenty of sunshine and some great subjects. In the narrow streets and squares surrounding the Arles amphitheatre, Pete captures the hustle and bustle of street life whilst seizing the stunning light when it is at its best. 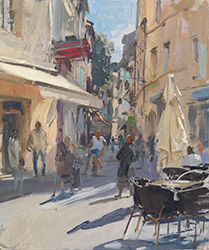 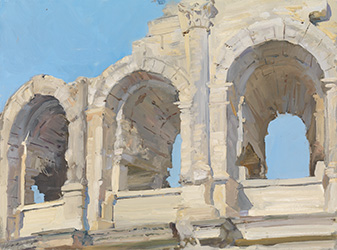 Pete the street Brown is an engaging presenter who has a nice line in self-analysis. At the same time, he is not a chatty painter. Most of his aperçus appear in voiceover, the nicely-judged wild track filling the gaps and providing a welcome sense of place and atmosphere.

His casual approach to painting (Im an old git who does what he wants) is belied by a throwaway line, Ive been here a week and painted [this scene] a couple of times  he clearly does a fair bit of research and immerses himself in a place before embarking on full-scale work. This makes one of the demonstrations, a quiet alley in evening light, all the more interesting. Working in unfamiliar surroundings where he has to interpret the location against fading and constantly changing light, we can see Pete thinking on his feet, and its a nimble performance.

The Arles that Peter paints is not that of Van Gogh or the tourist trail. That research and immersion leads him to places that are, while not completely off the beaten track, more domestic than grand. He begins with the Roman amphitheatre, but chooses to paint just three high arches, working from the basic shape to tone and shading, all in the almost monotone warm limestone of its construction. As an exercise in control and observation, this simple-seeming work is a masterclass in its own right and the magicians reveal is the addition of the bright blue sky right at the end that brings the whole thing suddenly to life, Like putting in a red letterbox at the end.

The other major demonstration is a backstreet with a variety of buildings, trees and more Roman remains. Again, Peter works from shapes to tones and then brings in detail. Of interest here is the way he works with figures. As we watch the painting develop, people pass, but rarely in great numbers. They barely get a mention and dont appear until near the end, when it turns out that Peter has been observing them all the time and they come both from immediate memory and a personal library based on constant drawing  I do a lot of drawing. Its the same in a quiet square where the day starts overcast and then brightens. Do I follow the light? leads to a discussion of the practicalities of plein air painting: Its a confidence thing, painting  the more you nail it in one, the better.

If you want a guide to painting Arles, this is perhaps not it. However, if you want a masterclass in observation and working alla prima, as well as a pleasant hour and a half spent in the company of an engaging and informative demonstrator, step right up.

Peter Brown is very well known around his home city of Bath, painting in all seasons and in all weathers. His new DVD, Painting Arles, sees him in the sunshine of Arles in the South of France - home to Vincent Van Gogh from 1888 to 1889, who produced over 300 paintings and drawings during his time there. Peter is completely at home painting the narrow streets and squares, capturing the light of the town and the hustle and bustle of street life. Demonstrations include three arches at the Roman amphitheatre and a backstreet scene. Peter's mastery of oils is a joy to watch and there's much to be learned from him about observation, the play of light and working outdoors.THE ARTIST - Summer 17

This masterclass in plein-air painting is as entertaining and informative as you'd expect from Pete the Street. Peter paints the backstreets and domestic squares of Arles and you won't find tourists or spot Van Gogh's footprints. He has an unerring eye for the quiet corner where he can explore shapes, textures, colour and tones. His way with figures is to construct them from passers-by and a mental library built up from extensive previous sketching. Part of the secret is familiarity. "I've been here a week and painted it a couple of times" being one of the biggest clues to Peter's approach to places and to capturing their essence without unnecessary detail.