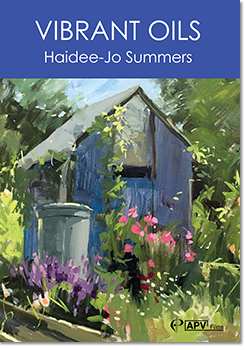 
Haidee-Jo is a professional artist who specialises in painting in oils. She works as much as possible en plein air, has excellent drawing skills and produces fresh and vibrant paintings which glow with light and colour. In this film Haidee-Jo chooses to paint on the Roseland Peninsula, one of her favourite parts of Cornwall. She selects seascapes - boats at anchor and a muddy estuary at low tide, as well as the pier at St Mawes at high tide. Other subjects include a sunlit garden shed surrounded by flowers and a quirky scene of an old milking parlour and shed.

This DVD is also available packaged with Haidee-Jos book of the same title. More info here... 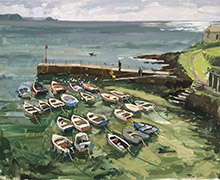 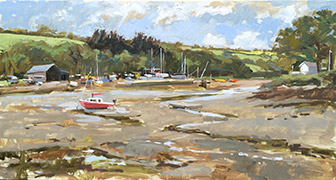 Review by Henry Malt
Some painting films are a polished performance, both in the presentation and on the paper or canvas. Others are more of an engaging couple of hours spent in the company of an artist as they explore their surroundings. Haidee-Jo falls into the latter camp and my notes add that some of her most eloquent passages are when shes completely silent, allowing the brushes to speak for themselves.

The title Vibrant Oils tells you little and its possible to see how difficult it is to characterise the work of an artist who is constantly fascinated by shapes and colours, and also by working out of doors  the nice thing is that you get to choose the best bits  theres a little bit of sparkle in the sea over there; Ill try to remember. Theres also a dichotomy of subject matter. The first three demonstrations  the DVD is filmed on the Roseland peninsula in Cornwall  are of harbour scenes, so boats play a large part. The second slightly-less-than-half, when the sun is bright, involves flowers and buildings. In the last of those, Haidee-Jo only half-jokingly laments having to put in the flowers in front of a nondescript tin barn shes fallen in love with. The thing is, though, that so have we. The film shows something about as unpromising as it can get, yet Haidee-Jo finds beauty, colours and shapes that have been keeping themselves well-hidden and, more importantly, communicates them to the viewer.

All-in-all, Id class this as a film about observation as much as anything else. If you want to paint plein air it is, to a large extent, something you simply have to do. There are certain practicalities, mainly involving equipment, sun hats and protective clothing, but in the matter of painting, looking, seeing and selecting subjects are the most important thing. Its amazing how little information the viewer needs  what simple marks I can make, perhaps summing that particular message up most succinctly. Theres also sound advice about planning your painting, working from dark to light and defining the image: Details are a treat to do at the end.

Some films are relatively easy to pin down. The artist has a message they want to get across and the demonstrations are a neatly-structured way of doing it. Here, much happens (almost) by accident and because something caught the eye, the first flower demonstration being one such. The whole is much more of a slippery customer when it comes to attempting a definition. Haidee-Jo works as she goes along and has what we might call an Oooh, look personality. If you want an enjoyable couple of hours where you can learn far more than youll perhaps ever realise, this is it.

Its also worth adding that the wildtrack perfectly captures the atmosphere of the scenes, from the proliferation of birdsong to tiny details such as the snick of a tripod being closed. Its attention to detail like this that make APV films such complete works.

Regular contributor to The Artist magazine, Haidee-Jo Summers work is greatly sought-after and this, her first DVD, gives us a glimpse into her working methods and the way she applies paint to create such vibrancy in her paintings. Working as much as possible en plein air, this DVD focuses on the Roseland Peninsula on the south Cornish coast, where she paints a muddy estuary at low tide, the pier at St Mawes at high tide, a sunlit garden shed and an old milking parlour. The settings are beautiful and its a pleasure to watch the ease with which she paints.ARTIST - November 2016

This is as much about observation and the use of colour as it is about the practice of plein-air oil painting. Haidee-Jo is an engaging companion whose enthusiasm for colours and shapes transmits effectively: l do like a challenge. A lot of painting outside, she says, is about remembering that first impression, adding, Look out for what might be changing most quickly. Her style is to comment and advise rather than to instruct and some of her most eloquent passages are in fact when shes silent. Those who favour more painting and less performance will be delighted.

Three of the demonstrations here are of harbour scenes, so there are plenty of boats and reflections, providing opportunities for lighting effects and improvisation. The final two, both in bright sunlight, include buildings and flowers where Haidee-Jo exploits the contrasts involved to the full.