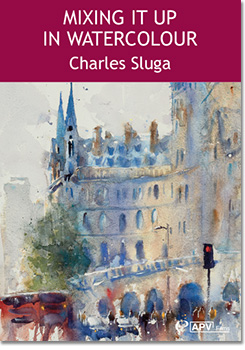 Mixing It Up in Watercolour


Charles is a professional watercolour artist from Australia. His work has been described as creative, brilliant and evocative and in this film the emphasis is on variety. His approach is to use a subject as a catalyst to design and produce a painting. He simplifies the complex to produce paintings which are realistic but with an abstract feel, changing the mood, light and tone to suit his concept. Painting in London his subjects range from boats on the river at Isleworth to St Pancras station and Piccadilly Circus in the busy heart of London and on to Greenwich with paintings of the Cutty Sark and the archway into the Old Naval College, each painted with a different emphasis Charles Sluga is a new name to me, but a look at his website reveals that he both travels and demonstrates extensively. The experience shows in this polished performance which kept me engaged from start to finish. Stylistically, I want to say that Charles is very much like most of the contemporary Australian artists whose work Ive seen. Is this unfair? Is there an Australian style or are there just painters who happen to hail from the other side of the world? There does, though, tend to be a spirit of the time, as well as locational influences. Let me expand: the creative process tends to feed off itself and there have always been schools and styles that can be located both chronologically and in terms of place. Its not just art, but design, making, music and so on. One person comes up with an idea, another embellishes it and, before you know it, its a theme. Theres also the fact that different locations produce different light. Britain has a varied, but often damp and cloudy climate which gives it styles like the Norwich school. Continental America can produce brilliant colours and strong lighting, although the painters of New England (maybe not so inappropriately named) give us work that we, across the Atlantic, can feel more at home with. Australia is, physically, more like America but is mostly populated round the coast. As a result, you tend to get the bright colours, but also more subtle hues. Their artists  or at least those that APV work with  also tend to work in a loose and impressionistic way.So, back to Charles. At one point, he draws a line that goes from abstraction to hyper-realism: You can paint anywhere on that, he tells us although, for this film at least, hes somewhere between representation and abstraction  recognisable subject, not much detail. His narrative can be summed up in a few quotes: A painting is a beautiful lie  I approach plein air painting as just a study to fool myself and relax  It should look like a bit of a mess at the start You dont want to have to count legs. What this means is that the subject in front of you is merely the basis for a design and he demonstrates this in the first session, a riverside scene where he rearranges the boats to make the subject stronger. He also indulges in a bit of theatre, showing how to handle a small brush: break it  throw it away!

The film is based in London and features five demonstrations starting from the riverside scene in Isleworth, and going via a study of St Pancras station, where massive detail is simplified right down. We then move to Piccadilly Circus, and finish at Greenwich in the east, where he paints the Cutty Sark contre jour as a tonal exercise in darks using Phthalo Blue. The final piece, the gates of the Naval College in flat lighting, is about colour and deliberately ignores both tones and hues. If you can get the major shapes down without getting caught up in the detail, youve got the essence of the painting.

This is, as I said hugely enjoyable, and also an informative film. Charles is knowledgeable both about his subjects  I didnt know that the statue in Piccadilly Circus is Anteros, Eross brother  and painting and painters in general. He also has the ability to analyse and understand his own working methods, as well as keep up a commentary and paint at the same time. These are rare skills, especially when done this well.

Australian watercolourist Charles Sluga ventures to London for his first DVD. By placing the emphasis on getting the painting to work, not copy a scene, he shows how to create dynamic artworks with a sense of light and space.

Shake up your watercolour!

Mixing it up in Watercolour by Australian artist, Charles Sluga, is all about variety. Here Charles shows you how to take inspiration from whats in front of you, then change the mood, vary the light and tone, whilst making sure that the subject doesnt take over. Charles has a spontaneous style that suits the fluid nature of watercolours perfectly. The skill, he says, is to use elements from a scene, then simplify them until they become almost abstract. This allows you to alter the subject to make of it what you will. Dont spell everything out, he says, let it have mystery.

The filming takes place in London and includes crowded scenes in the heart of the city at St Panras station and Piccadilly Circus, as well as quieter locations featuring boats on the river at Isleworth, the Cutty Sark at Greenwich and a view through an archway into the Old Naval College.

Australian artist Charles Sluga travels and demonstrates extensively, and his experience shows in this polished performance. Informed, informative and entertaining, Charles will keep your attention at all times throughout this packed film. His style is loose, though he points out that you can work anywhere on a scale between pure abstraction and the fine detail of hyper-realism. Here, he is at pains to use the scene as a catalyst for designing a painting like a beautiful white lie. This means selecting and rearranging pictorial elements to create a harmonious whole. He also concentrates on the use of colour and tone to the same end. Filmed in London, this is a varied, fascinating and thoroughly enjoyable piece.