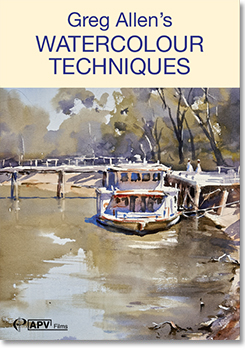 
Gregs response to the world around him is not confined to any one subject matter. He has developed a technique using three types of washes that apply to all his subjects, whether landscape, portrait or seascape. The key is to see where these washes appear in the world around us. Working in Australia he paints in a pioneer village before tackling a boat shed interior, a portrait and an estuary in the evening light. This is a great way to learn about improve your watercolour techniques. You cant help but warm to this from the start. Isnt watercolour fun? are Gregs first words as the introductory scenes roll past. Well, yes, it can be, and it certainly is in the hands of this competent and entertaining demonstrator.

Greg has a clear understanding of the processes of watercolour painting and he also has a way of simplifying them and then explaining them coherently. He begins with his three effects theory. Well, its more than a theory, as he demonstrates how marks vary depending on how much water you have on wet, damp and dry paper. So far, so fairly conventional, but he goes further and shows how these (and just these) can be used to capture any shape. Lay a wet wash and let it run from heavy to light down the paper. Its a sky. Turn it on its side, add defining lines and its a cylinder, which he rather magically turns into a tree. Back in the day, hed have been hiding from the witchfinders!

Greg is also a versatile painter and the film includes no fewer than five demonstrations including a riverside scene, a complex boatbuilders shed and a portrait so lifelike you expect it to speak. His style is loose and he uses shading and colour (words that recur again and again throughout the film) to convey shape and substance. As so often happens, these arent always the colours youd expect and its the juxtaposition and contrast rather than exact copying that convey the subject.

Theres another phrase that crops up: If I cant see it, I cant paint it. On the surface, that seems obvious, but what Greg means is that he needs to be able to see how a scene, or an element of one, translates into his three effects and how colours, and especially shadows, work.

At the end of the film, theres a fascinating short section in which Greg explains how he has added finishing touches to each of the demonstration paintings back in the studio, changing lighting, adding or removing detail and muting or brightening colours. Even though the process isnt shown, the explanations are so clear that you really dont get left wanting more and I actually think making this longer could have been dull and mechanical.

This is a hugely entertaining and informative piece that perfectly captures Gregs enthusiasm for a medium that certainly can be fun.

Greg Allens second DVD for APV Films, Greg Allens Watercolour Techniques, explores the artists trademark three washes, which he explains can be used to capture any subject, from landscapes to portraits. By applying the paint to very wet, damp or dry paper, he varies the textures and impressions he creates. He explains, its all about looking at the world around you and seeing the world in paint washes. Melbourne-based, Greg has an infectious love of watercolour and his exuberant demonstrations convey that energy throughout the film. Four demonstrations are included here  all in Australia  including a pioneer village, a boat shed interior, a portrait and an estuary in evening light. The film closes with an interesting discussion of the small adjustments he makes to his work back in the studio.