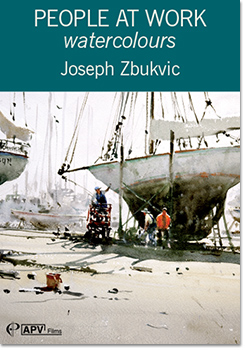 
Joseph is one of the leading watercolour painters of today, with his atmospheric paintings of rural life and strong urban scenes. Here he selects a range of subjects to illustrate working life. Painting in and around Melbourne, he captures the noise and heat of a road gang at work on the street, grape pickers in a vineyard, figures working on a yacht in the dockyard and market stall holders on a busy morning. Working in his studio, he gives a practical demonstration of how to capture movement in figures including a chef at work. The first review I did of this was for a magazine and I was limited to 150 words. You have to be pithy in that length and the challenge now, when I can write as much as I like, is to capture the joyful simplicity of this delightful film while at the same time taking the opportunity to tell you a bit more about its content.

I was captivated in the first ten minutes. In that short time, Joseph demonstrates how to capture figures from stationary to full exertion in just a few brush strokes. He also shows the importance of structure and proportion  how the rest of the body is always seven and a half times the height of the head and how you should be able to achieve that without measuring. It just looks right. Change it and you either have a Martian or a child. Its engaging as well as a forehead-slapping moment  Of course!

The body of the film is shot on location and Joseph paints and sketches a variety of figurative compositions  at a market, roadworks, a harbour and a café as well as grape-pickers in a vineyard. In the course of these, he explains how to identify your subject, then to assemble the figures that will go in it and, finally, to simplify. He also has valuable advice on the structure of the whole work  Foreground takes you in, middle grounds the stage with your figures and the backgrounds just a pattern. Dont over-work it.

The important thing throughout is that these are not portraits, theyre figures that are there to do (and are doing) a job and they need to fit, both in terms of action and proportion, into the scene as a whole.

Its a hugely informative film, but done with such a light touch, both artistically and in terms of presentation, that youll hardly notice youre learning.

There's a delightful informality to both the subject matter and the presentation of this film. As Joseph puts it, 'Watercolour commands what you do. l'll just go with the flow.' As he works in a variety of locations, Joseph explains and demonstrates how to identify, simplify and assemble your subject. You shouldn't, he says, just paint everything in front of you, but rather pull in figures that catch your eye and are appropriate to the scene you're creating. He is also trenchant on the structure of a painting: 'Foreground takes you in, middle ground's your stage and the background's just a pattern. Don't work it to death.

The results have a spontaneity that retains a sense of movement and the first ten minutes of the film show how simple shapes can capture stationary, active and fast-moving figures, as well as the importance of structure and the basic proportions.

Highly regarded tutor, Joseph Zbukvic brings us his 5th film for APV, this time using watercolour to paint people working in and around Melbourne. Starting with the noise and heat of road menders, he moves on to grape pickers in a vineyard, people working on a yacht in the dockyard, before finishing with stall holders in a bustling market. The majority of the film is shot on location  although there is a studio session where Joseph describes how to capture moving figures. Despite making it look easy, Joseph is an excellent tutor and there is much to be learnt from his technique of simplifying the subject down to the elements that matter.

(10/10)  Submitted by: Bob 19-Jan-2014
Never fails to impress me Joseph makes it look so easy best artist around at the moment in my eyes