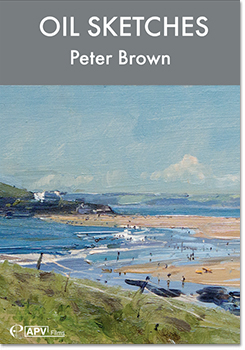 
Peter Pete the Street Brown is best known for his oil paintings of street scenes as well as landscapes. He paints outdoors in all weathers, working directly onto oil boards or canvases. In this film he paints in London where, braving the rain and cold, he paints a market scene and a view of Lambeth Bridge. We then follow him to the south coast of Devon where he finds wonderful beach subjects at Bantham Bay.

Ive spent a great many years trying to work out what the difference is between a sketch and a painting. Youd think it was obvious: a sketch is, well, sketchy and a painting is something thats planned and executed meticulously with time being no object. Except that some artists are quick workers, paint on location and use broad, quickly-applied strokes. Does this make them sketchers rather than painters? Well, no, for reasons Ill elaborate.

The difference, I now know, between a sketch and a painting is that, while a painting is planned, a sketch coalesces. And, if you dont understand or even agree with that statement, I refer you, mlearned friend, to Exhibit A: this DVD.

A lot of artists are really at home in the studio. Take them out, film them on location because it makes for better TV and you can see that theyre like a fish out of water. The noise, the wind, the people, the bright or changing light, even the occasional shower, take them out of their comfort zone and it can be painful to watch. Ive seen demonstrations that break down at the final hurdle because of it, compositions that dont quite add up and perspectives that, well, my dear, frankly

Peter Brown is apparently known as Pete the Street. This isnt actual TV, so Im inclined to believe the sleeve notes. He tells us at the beginning that he does most of his work out of doors, and its immediately apparent that this is his natural habitat.

The first demonstration is at the top of Broadway Market in Hackney and is as busy as it can get. People and vehicles move in and out, the light changes, especially after a shower, but Peter is unfazed. This is also where I came up with my definition of the sketch. Theres no blocking-out, the structure of the painting isnt pre-planned  at least not on the canvas. Instead, Peter works from the main structural features, allowing the scene to develop, almost with a life of its own. In this way, the fact that its constantly changing doesnt matter. Certain fixed points emerge and figures are inserted as and when the composition demands.

The scene now changes to Lambeth Bridge and its raining. The tones are basically greys and greens, but Peter manages a composition that not only captures whats there, but has life as well, which is a neat trick.

The final three demonstrations are painted at Bantham Bay and Burgh Island in Devon. The first, done in bright sunlight, is of interest because later assesment reveals that, viewed indoors, its too dark, and remedial work is required the following day. These scenes are also heavily-populated and Pete betrays his roots: Im itching to get on with the figures, which he adds as tiny, yet essential, brushmarks.

When videos first appeared, they were normally limited to 60 minutes partly, I suspect, so that the more robust standard play tape could be used. The result was that the demonstrations often jumped from one stage to the next, with big cuts in the progress. DVDs opened everything up and, at nearly two hours, theres a lot of material here. However, even that cant really contain five full paintings and theres clearly been a lot of editing, but its almost impossible to see the joins and it feels as though youre watching the whole process.

Review by Theodora Philcox
ln his first DVD for APV, Peter Brown shows the fluid and very impressive results you can achieve sketching with oil. Peter prefers to work outdoors, and in his film, Oil Sketches, we see him on location in London and Devon, come rain or shine.
He starts in London painting a busy view of Broadway Market in Hackney. He battles with awkwardly parked cars and changing light, alternating between bright sunshine and pouring rain, which demonstrates how he needs to paint with some speed. Working on board rather than canvas, he is able to draw in figures by scratching their outline as a guide before adding colour.
His second painting is of Lambeth Bridge, with the Houses of parliament looking misty in the rain. Here he paints on MDF, primed with acrylic gesso, which allows him to work with his paint thin, encouraging a looser approach than in the previous composition. The rain eventually prevents the paint adhering to the board so after a break he scrapes off some of the colour then reworks it on the ghosted image that remains.
There is such a contrast between grey wet London and sun drenched Devon in the second half of the film, but the bright sunlight gives him the opportunity to explain how this can adversely affect your judgement of colour. Brown's informative, friendly approach makes the film very engaging. THE ARTIST - October 2013

Review by Henry Malt
A painting is planned, while a sketch coalesces. Watch this absorbing and well edited film and you'll see what I mean. Peter Brown works almost exclusively outdoors and in oils and is at home dealing with moving people and vehicles, changing light and even the odd shower of rain. Finding him in his natural habitat makes particularly instructive viewing.

There are five demonstrations here. The first, a busy street scene at the top of Broadway Market in Hackney, deals with all the problems I suggested above. Peter then moves to the South Bank at Lambeth Bridge, where he handles a limited tonal range with aplomb. The final three scenes are painted at Bantham Bay and Burgh lsland in Devon. These are calmer locations, though well-populated, and a slightly more conventional approach is apparent. Nevertheless, light plays an important part when bright sunshine makes it difficult to judge tones and later work is required.

(10/10)  Submitted by: Helen C ( Australia ) 9-May-2013
This is plein air painting at its best! To realize this one only has to watch the very first demo of a busy street scene, with market place, people coming and going and the weather changing from dark skies to sunshine to rain. Most painters would have given up and gone home but Peter stays till the end producing an amazing and ever evolving painting full of life. Bravo! The remaing demonstrations are equally inspiring and extraordinary. I'll be watching this DVD over and over again. Is it too early to ask when the next one will be?

(9/10)  Submitted by: P. Mills 11-May-2013
I admire Pete for his unwavering energy and skills he has developed over recent years. It a shame the video didn't show us more about the guy himself and his working practices. Traveling from coast to coast and then just seemingly pop up to London and get your easel out in the pouring rain and bang off a couple more paintings. How does he do all that and have a large family? Beats me. He admits himself that he enjoys being in the limelight unlike a lot of artists who find it difficult to deal with. This obviously helps immensely but i appreciate it can't always be easy as it looks, even for him.