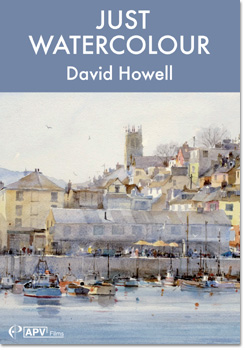 
David's approach to painting is very much concerned with capturing atmosphere and a sense of time and place. He works as much as possible outdoors, starting with an initial sketch using pencil and coloured crayons. His watercolours are then painted without pencil drawing, resulting in fresh and lively paintings. In this film we follow him as he paints on the Somerset Levels and then along the south Devon coast at Brixham and Salcombe. ln his first practical DVD, the esteemed president of the Royal Society of Marine Artists lays out his pencil free approach to watercolour. Painting in Somerset and Brixham last surnmer, he shows how to build up an idea through drawing separately first, so you then have the confidence to paint directly on to the page.LEISURE PAINTER - April 2013

Review by Theodora Philcox
Completely pencil-free watercolours! The idea is unnerving, but the results can be impressively pure. David Howell, President of The Royal Society of Marine Artists, is an advocate of this method, and in his first film for APV, Just Watercolour, he provides the opportunity for viewers to appreciate exactly how it is done.

Howell works on location, moving around on his motorbike, so he keeps his equipment simple. He uses pans, rather than tube paints, limiting his colours to a warm and cool variant of each primary, along with a number of earths. For sketching, he carries a roll of coloured and ordinary pencils.

Howells method is to first undertake a number of separate sketches, often adding colour for reference when working back in his studio. But these drawings also give him a feel of what goes where, so that he can confidently construct his paintings straight onto the paper, without any underdrawing. He demonstrates this when tackling a broad view of the Somerset Levels, with a reed bed in the foreground to set against the trees in the distance. After completing a couple of sketches, he applies his paint straight onto the paper, initially in loose washes, and then adds detail with a lizard lick Rigger, and a sharpened stick. This natural landscape is contrasted with a view of Brixham harbour, with its jumble of buildings and boats. The challenge here, after the initial sketch, is to ensure the whole composition will fit onto the paper, as he has no pencil guide.

Moving down to Salcombe, he goes off the normal tourist route, to find an area of old boatsheds in various stages of disrepair. They create interesting shapes through their characterful architecture and cast shadows. He combines this view with sketches of boats nearby, showing how to collect and blend visual material. His final work is a watercolour sketch rather than a resolved composition, of the expansive River Teign. Though only a sketch, he still does a little preparatory drawing to get the feel of the composition. To conclude, Howell puts the finishing touches to his painting of Brixham Quay back in his studio. The painting showcases the advantages of the pencil-free approach through the sheer clarity he achieves. The film should inspire readers to try drawing a composition separately, and then having a go at painting without any guidelines. It is definitely a challenge, but if mastered, it allows watercolours to show their luminous potential.

Review by Oliver Lange
David always starts with a drawing, although in his case not on the watercolour paper itself but as a separate study. In his new film Just Watercolour he paints in Somerset and south Devon. Using the initial sketch as a source of guidance he gradually develops each watercolour to a wonderfully sensitive but strong sense of finish. Again, there are lots of useful tips  leaving gaps in which to place figures, for example, and encouragement to move to and fro across the picture so that no one area becomes too detailed. This is plein-air painting at its best!ARTBOOKREVIEW.NET - August 2013

This stripped-down approach does, however, allow him to concentrate on the painting, the Just Watercolour of the title. A small half-pan box, a couple of brushes, a block of paper and a really quite generous roll of pencils are all he needs.

Ah yes, the pencils. David explains at the beginning that he doesnt like to sketch on the watercolour block itself; rather he prefers to make a coloured pencil sketch that gets the composition, provides a record in case anything changes and also helps with details that may be important later.

With this done, David works straight onto the paper. His first outing, on the Somerset levels, is a series of washes that blend into one another, with more defined shapes, such as a gateway, done wet-in-wet, the result being a graduated progression of colours that captures a misty morning perfectly.

Later demonstrations at Brixham and Salcombe are more complex scenes with boats and buildings and it is interesting to see how David uses blocks of colour, building up a composition of initially unconnected shapes, gradually bringing them together using the pencil sketch as a guide.

The result is an intriguing and delightful wander through the ways of watercolour, with lots of good advice along the way

(10/10)  Submitted by: steve garside 17-Dec-2012
Excellent DVD, This man is a pleasure to watch. I do hope he will be making more DVDs. I have watched this one now over 11 times, and each time just gets better and better. The watercolor paintings are so clear, and crisp. It almost makes me think I have to start learning all over again.
Thank you David Howell. You are a star sir'..