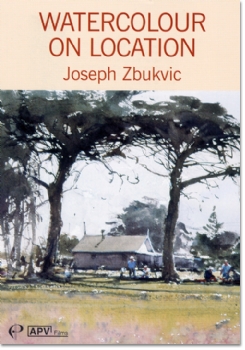 
Joseph is a highly accomplished watercolour artist who believes that it is important to work outdoors, on location, as much as possible. Painting in Australia he creates a magical mood in his watercolours as he paints a Melbourne street in the evening light and captures the atmosphere of coastal scenes along the Great Ocean Road. He also paints a stunning panorama of the Yarra Valley and a colourful afternoon at the races. 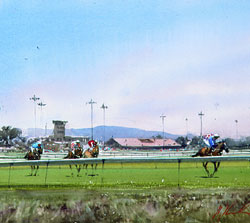 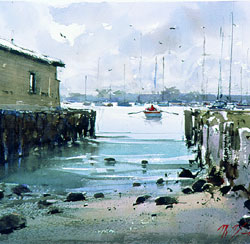 Another highly acclaimed artist who loves painting outside, this time in Australia, is Joseph Zbukvic. In his new film, Watercolour on Location he works at several stunning locations around Melbourne, including in the Yarra Valley, and treats us to some wonderfully skilful and atmospheric paintings. All aspects of plein air painting are covered, from the choice of subject matter and palette to the handling of different paint effects to suggest depth, light and mood. An important point, Joseph advises, is not to lose faith with your painting. As he says: When you take your painting home you will probably be surprised at your efforts.LEISURE PAINTER - April 2006

Watching Joseph Zbukvic work is a little like watching a trapeze artist. At times during this latest DVD, Watercolour on Location, I found myself gasping as he boldly slicked a shadow right across one of his beautiful watercolours, convinced he had ruined it. Every time, however, his move was well judged, and the result was even more impressive.

Zbukvic is both exciting and a joy to watch. Born in Yugoslavia, and with over 200 awards under his belt, he is now resident in Melbourne, and has a relaxed and very personable presence in front of the camera. Totally committed to the benefits of working outdoors on location, he good-humouredly takes on the challenges of snakes, insects and the wind. We watch him turn sometimes quite ordinary scenes into very beautiful paintings, as well as taking on more monumental views.

The film includes a quiet run-down wharf in Queenscliff, a café amongst a group of Cypress trees, a street scene in a Melbourne suburb, horses in action at the Kilmore racetrack, and finally a breathtaking panoramic view across the wine-growing Yarra Valley. As the artist looks down and across the expanse of this view, the depth and atmosphere he achieves is inspirational.

Zbukvic recognises the anxieties that can arise when creating an image, and emphasises the need to keep faith in the fact that even though it might look chaotic, if we stick with it, it will suddenly begin to come together. For Zbukvic, here, at least, it always does, and it is exhilarating to see structural elements, and eventually the smaller details, evolve and come to life.