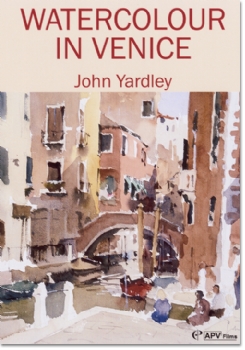 
In this film John takes us to Venice which for many years has been a source of inspiration for his painting. He chooses three contrasting subjects: a stunning pink palace seen across the Grand Canal, a quiet canal and bridge and a view of the colourful stalls by the fish market. The film finishes with a studio painting of gondolas in the basin behind St Mark's Square, taken from sketches.

For a French version of this film "L'aquarelle à Venise" click here... There is something to be said for watching a master painter at work without the interruption of complicated and involved comments. After all, words can never completely explain the way in which watercolour effects are achieved and observation comes second only to painting itself. In his latest video entitled Watercolour in Venice, John Yardley refrains from the skilful manipulation of the medium. Indeed, the video is a tour de force of understatement and a remarkable guide to direct painting on site.

The relatively few comments Yardley makes, as his brush flicks confidently across the paper, are a combination of thoughts and observations. They range from the difficulties of mixing colours which approximate those in the scene facing him, to quite unrelated observations, such as rhetorically questioning why rowers who speed past him whilst practising for a race should stand up in their gondola. Strangely perhaps, this does not divert attention from the action of his brush and the accomplished ease with which he captures the intimacy of a small piazza, the bustle of the fish market, or the grandeur of a modest palazzo on a canal.

If what he doesn't say helps one focus on the actual making of the work, what he does say about painting should reassure any leisure painter. Despite his reputation and status, John Yardley is as vulnerable as any of us to the difficulties of watercolour. At one point he confesses, "I really don't know how to get this colour"; on another occasion he admits that "this particular subject which, on the whole, I was really looking forward to, has really caused me far more anxiety ... ". He is also self-critical, an encouraging trait when applied constructively.

True, Yardley's subject is the very best a painter could want; "Venice is absolutely gorgeous," he says, "you can't help but want to get at the paintbox." But what he achieves in the brilliant light and inspirational setting of Italy's most romantic city can be applied to more prosaic locations which may be but a stone's throw from one's doorstep. This, together with fine close-up details of Yardley in the full flow of masterfully applying watercolour, provides an incentive for any watercolouristTHE ARTIST  December 1995

Watercolour in Venice by John Yardley.

With over 150 art videos on my shelves I have probably viewed more than most people. I seldom watch a video more than once, so perhaps the greatest compliment I can pay John Yardley is that I shall certainly look at this video several times. It is superbly filmed and something to savour and inspire. John is very much the Englishman abroad as he selects his spot and paints whilst Venice goes on all around him. From the first nervous marks of a view across the canal from his hotel balcony to the finishing brush strokes of a scene with gondolas painted back in his studio, we are treated to some delightful painting accompanied by a splendid mix of thoughts, comments, insight and dry humour. "I hate painting trees," he says, "mainly because they are so difficult." The colour, light and atmosphere of Venice are magnificently captured with a touch that most of us will envy.