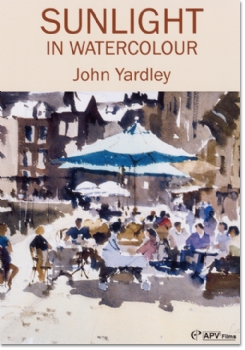 
John is a master of modern impressionism, simplifying the most complex scenes into shapes of subtle colour. The use of strong sunlight is an all important feature of his work and in this film John uses it to great effect. He paints figures and interiors in the UK before travelling to Northern France where his subjects include the beach at Deauville and views of a crowded café and busy harbour in the charming port of Honfleur. It gives me particular pleasure to review John Yardley's first instructional video. Having made his acquaintance some years before he became a highly successful full-time artist, and having recognised at once the promise and the quality of his work, I have since taken personal interest - and pleasure - in his meteoric rise. It is a source of pride that he contributed six brilliant watercolours for reproduction in my book, Developing Style in Watercolour, published in May 1992 by David and Charles.

John Yardley is one of Britain's finest contemporary impressionists with the rare ability to convey the essential atmosphere of a scene with a few masterly brushstrokes. The secret of his success lies in his keen powers of observation in paint. It is his ability to make sunlight positively shine from his paintings that gives his work its very special quality.

Although John is equally at home with oils, in this video he concentrates on watercolour, his first love, and demonstrates how he captures the brilliant effects of sunlight. He modestly admits he is happier painting than talking, but what he has to say makes a great deal of sense. He begins each painting with some well considered pencil drawing and it is this that gives his work a firm structure of sound composition, even though subsequent lively brushwork may well modify certain passages.

His painting technique is bold and loose for he believes that excessive care and caution are the enemies of spontaneity. His favourite paper is Arches 140 lb. rough, which he always stretches, and because expressive brushwork is a vital ingredient of his work, he uses only the best sable brushes. These he holds as far away from the business end as possible, to give his work greater freedom. He uses a limited palette to good effect and employs strong tonal contrasts to achieve his dramatic light and shade effects. His confident handling of brushes on the rough surface of his paper enables him to produce broken washes and dry brush work with apparent ease.

His first demonstration painting, an interior, shows a glimpse of garden, with sunlight streaming through the open door of an old house. I was interested to hear that all his greens start as mixtures of cadmium yellow and Prussian blue which he then modifies with other colours as necessary. His water jar is always filled to the brim so that he may judge exactly the amount of water he is using a vital consideration in watercolour painting.

His second subject is a figure standing against a window, trying on hats, his wife being the attractive - and patient model. Once again he handles the back lighting brilliantly and his bold, confident brushwork quickly achieves the desired effect. He then demonstrates his method of painting figures in the landscape, concentrating on posture and grouping rather than detail.

His last two demonstrations are painted on location in the attractive Normandy port of Honfleur, beloved of artists of all eras. The first is a busy harbourside scene with buildings, shop fronts and crowds in the distance and water and moored boats in the foreground. The second is a waterside cafe with seated figures under large green umbrellas, again with old buildings in the background. The amount of detail in both subjects is truly daunting, but John's approach is an object lesson in bold and effective simplification and his dictum, "If I see a jumble, I paint a jumble," says it all.

The programme ends with a selection of the artist's watercolours which includes figures, animals, a railway engine and several scenes from Vienna and Prague.

This is a video I can recommend unreservedly to all aspiring watercolourists intent on loosening up and capturing the effects of light.THE ARTIST - July 1992

Sunlight in Watercolour By John Yardley

Anthony Parker has been generous to us. This video shows John Yardley at work capturing the joys of sunlight and shadow as only he knows how. Two interiors, including one with his wife posing fetchingly in a lovely hat, a beach scene, a crowded outdoor cafe and the quayside at Honfleur, and a brief but informative workshop in painting figures with the minimum of detail, make a full package.

John Yardley is the most diffident of artists before the camera: his diffidence stems from honesty. He talks frankly of the "terrifying problems" in the scene before him as he demonstrates and it is apparent that part of the Yardley phenomena is the 'do or die' dash and courage to conquer this fear with real engagement.

Close-ups of his brushwork show it to be wand-like. We watch his wavering, questing brush "held as far back from the bristles as possible" cover the 140lb Arches stretched paper with the "big juicy" rich tonal masses that he loves. Bright light, strong contrast - these he responds to.

He is honest enough to let us witness him mess up a chimney on the house on the Honfleur dockside, albeit the final result successfully supersedes this minor hiccough. He demonstrates brilliantly the painting of figures walking outdoors with the same rich full brush. Inside he shows how to respond to the subtleties of incident light and its transformation of tone and colour. Delicious hats!

All this is fine, but then we get truly into a Yardley painting when we see him break all the rules of watercolour by working 'lean' over 'fat': thin washes, softening and harmonizing, brushed over the big blocks of dark tone already placed on the picture' surface. His fear of failure is disingenuous in such a talented man. It is love of the visual feast in front of him that carries him forward.

If you polled the watercolourists of Britain as to who they would most want to paint like, my guess is they would plump for John Yardley. The British collective consciousness loves the sparkling depths of the medium as he uses it; Puritans, to a man and woman, we equally require an anxious brinkmanship, a gladiatorial tussle to 'bring it off'. This is the 'angst' we see John Yardley overcome, to our relief. In his case with a seeming gentlemanly effort that belies his tussle in this most nerve-wracking of artistic ordeals. A palpable relief and a thoroughly entertaining and instructive video.