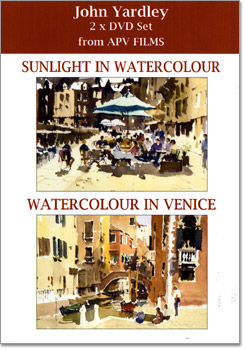 Sunlight in Watercolour
John is a master of modern impressionism, simplifying the most complex scenes into shapes of subtle colour. The use of strong sunlight is an all important feature of his work and in this film John uses it to great effect. He paints figures and interiors in the UK before travelling to Northern France where his subjects include the beach at Deauville and views of a crowded café and busy harbour in the charming port of Honfleur.

Watercolour in Venice
In this film John takes us to Venice which for many years has been a source of inspiration for his painting. He chooses three contrasting subjects: a stunning pink palace seen across the Grand Canal, a quiet canal and bridge and a view of the colourful stalls by the fish market. The film finishes with a studio painting of gondolas in the basin behind St Mark's Square, taken from sketches.