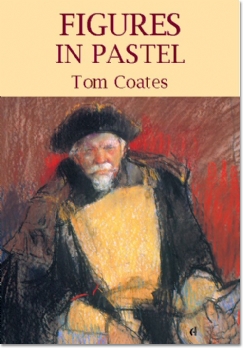 
Tom is a master of figurative painting and drawing. In this, the first in a trilogy of films, he works in pastel and paints a portrait of a local town crier, dressed in full regalia. He produces a series of pastels of models, taken from drawings in his sketchbook and he also paints that most difficult of subjects, a self portrait. This film gives a unique insight into the working practices in the studio of a distinguished artist painting and drawing in pastel. President of the Pastel Society and past president of the Royal Society of British Artists, Tom Coates is one of the UK's greatest pastellists. APV has produced a set of three films featuring this noteworthy artist, launching the series with Figures in Pastel.

The film opens with Coates demonstrating a studio portrait of a local town crier, dressed in full robes. He then turns to his sketchbook and selects three studies of models to develop into larger paintings. Coates works quickly, finding it useful to have a number of images on the go at once to spark off ideas.

Settling on one of his compositions, he works it up to a more finished conclusion, adding interesting shapes and coloured objects from around his studio. The latter is an amazing place with two floors of what some might describe as clutter, but which for Coates are things that define who he is. They certainly provide a wealth of inspirational props for his work. Donning a straw hat, he embarks on an enquiring self-portrait, accompanied by his natural entertaining commentary.

Coates is a lively, self-critical and friendly presenter, who, combined with his superb talent, makes the film easy to listen to, educational and a pleasure to watch.http://painting.about.com/
Marion Boddy-Evans

Watching this DVD is like visiting the artist in his studio, watching and listening to him chat while he paints. You see Tom Coates painting a pastel portrait from a model, painting a self-portrait, using figure sketches from his sketchbooks to develop paintings, and looking around his studio to find elements to include (great for anyone who's ever needed to justify collecting appealing objects). You're likely to view it several times as it's so inspiring and informative.

Tom Coates' Figures in Pastel DVD is filmed entirely in his studio, so it's as if you've popped in for a visit and stayed to watch as he paints. If you've ever wanted to see an experienced pastel painter at work, this is your chance. The first pastel painting is a portrait of a local town crier, dressed in full regalia. (The one on the cover of the DVD.) It's a large painting, in which the facial features are done to a greater level of detail than the rest. I particularly liked the shots where you could see the painting and the model at the same time, so you can compare what the artist is seeing to what he's painting. Coates then shows how he develops paintings from figure sketches in his sketchbooks, how he works out a composition and refines it as he goes along, and how he uses objects in his studio in his paintings (including an old chair and a rocking horse). If you ever need to convince yourself or, more likely a partner, that it's a good thing to collect interesting objects in your studio, Coates' paintings will prove it.

In a self-portrait wearing a straw hat, Coates produces a painting that at one stage is very red as if he'd got extremely sunburnt!

The DVD is packed with tips on pastel painting, composition, and color. Watching Coates at work, adjusting the accuracy, color, and composition as he paints, will be inspiring to anyone who doesn't like to plan in detail before painting. He talks you through what he's doing, so you can understand why he's done what he has.

For Tom Coates in Figures In Pastel, the first of three films he is making with Anthony Parker, the variety comes from the different working methods and approaches that can be involved when tackling the subject of the figure Tom is an accomplished artist in many different media, of course, but here we see him working in pastel, first from a model, then from studies in his sketchbooks and finally on a self-portrait.

In the first painting, of a local town crier dressed in full regalia, Tom begins with a loose drawing made with a chalk on a stick, which he says gives him "a feel for the subject and prevents things from getting out of scale". He works on thick card, with a restricted palette, always considering the whole subject and avoiding establishing anything too quickly. Unafraid to challenge the marks he makes, he likes to model and remodel the form, pushing the medium around and letting the subject dictate the process. So, gradually, a likeness of the subject emerges, leaving just enough to our own imagination and conveying a great sensitivity for the medium itself.

Next Tom works on several pastels of the nude model inspired by drawings in his sketchbooks. This section of the film is particularly absorbing, for he greatly enjoys the freedom of working in this way, with its opportunities to experiment with various aspects of composition and technique, and there are plenty of observations and ideas for us to follow up. So, too, with the self-portrait. As he points out, this is another form of discipline that helps us understand composition and master different techniques.