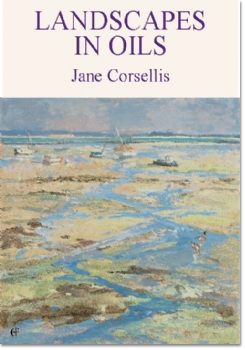 
Jane has a wonderful sense of colour and composition that she uses with great subtlety to describe the very essence and character of her subjects, uncovering the hidden shapes and patterns. In this film we see her working in Brittany, Northern France where she paints views of Mont St Michel at low tide, inspired by the reflected colours in the mud, and in the fishing port of Cancale. We then follow her to Pembrokeshire in Wales where she spends several months every year. Here she paints the wild ponies grazing in the hills as well as the local beach in the evening light. 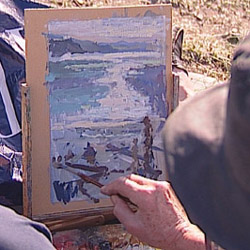 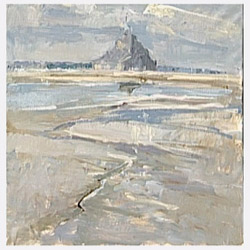 Having recently read Robin Capon's excellent and inspiring book, Jane Corsellis: A Personal View, I was delighted to review a video of Jane at work. Landscapes in Oils demonstrates her wonderfully free approach to painting through a series of views of Mont St. Michel, and Cancale, plus two quick sketches in Pembrokeshire, where she lives for six months of the year.

Her paintings of Mont St. Michel are intended as studies for more formal paintings she aims to produce later. The first shows the Mount at low tide, giving rise to shimmering reflections. Jane works rapidly, painting over a prepared coloured ground, frequently using her hand to work the colour in.

For her second painting, she selects a view that combines the mud flats with a certain amount of greenery, and includes the impressive Lion Rock that stands next to the Mount. Jane shows how she works all over the canvas all of the time to maintain the unity of the image, only giving up when rain obliterates the scene.

As a direct contrast, her next painting is in bright sunshine on Cancale harbour where she discusses the difficulties of working amongst the public. She appears to struggle with this painting, but it is very illuminating to hear her question her progress and articulate the problems she encounters. More successful is another view of Cancale, this time focusing on the silvery mud flats in the harbour, which are dotted with boats and passing ducks. Jane then takes us back to her studio where she provides a critical evaluation of her work.

In the final section of the video, Jane moves to Pembrokeshire where she braves a hilltop location on a very windy day to undertake studies of the ponies that populate the area. She views them as an integral element of the landscape in the same way that she sees rocks, and produces simple sketches of the animals to provide source material for later works.

Jane is fascinating to watch. She exudes creative modesty yet tackles her subjects with such confidence. She creates marvellously subtle symphonies of colour, which, combined with a great sense of composition, clearly demonstrate why her work is held in such high regardTHE ARTIST  July 2001

The inspiration for Jane Corsellis's beautifully crafted landscape paintings is invariably a certain kind of light. In Landscapes in Oils we find her painting in Brittany at Mont St Michel and the fishing port of Cancale, later returning to paint a number of subjects in Pembrokeshire, where she spends several months every year. It is fascinating to watch, as each painting evolves from initial marks and smudges of paint applied to a prepared ground into a work of great sensitivity and impact. The three paintings at Mont St Michel include a quick, informative pochade box study, and there are equally effective studies of hill ponies and beach scenes made in Wales. The commentary is highly informative and the filming is superb.

(10/10)  Submitted by: Judith Logan-Farias 2-Oct-2011
I got this film after watching her watercolour one. Jane`s paintings are full of emotive brushwork and harmony of colour. With 3 small children, attending classes is not feasible for me and I really have learned an enormous amount from watching these films. While not cheap on any account, they are invaluable since you can go back time and time again to recap on something, or quite simply for the pleasure of watching a great artist at work.